Let’s start with the tunnels in our neighbourhood. Beneath Victoria Parade between the Eye and Ear Hospital and St Vincent’s Hospital the medical staff have been shuffling patients  and pathology samples along this underground tunnel since 1983.  You can glimpse this tunnel in the 2002 music video for the song “Falling for You” by the Whitlams.

The underground stories get a little more interesting when you start looking at notorious Melbourne underground figures. John Wren, a colourful figure in the early 1900s in Melbourne ran an illegal SP betting operation from a Collingwood coffee shop. As with all illicit enterprises an escape tunnel was useful and this one led straight to a local pub, probably “The Bendigo”. Whilst some dispute this rumour, as a historian I tend to find that there is always some truth to local lore.

How about another juicy scandal involving a politician and a call girl?  It’s rumoured that from Parliament House on Spring St to the Exhibition Building in Carlton lies a tunnel with a number of exits. Reputedly the word ‘call girl’ originated from politicians making a request (a call) for a working girl from one of the nearby brothels such as Madame Brussels in Little Lonsdale Street. The girl would then make her way to Parliament House via this network of secret tunnels.

There was a tunnel system also running from The Treasury in Spring Street to the banks. An underground railway pulled by horses connected government buildings on Spring Street and the Treasury Gold Vault. Keep those pesky bushrangers away at all costs! 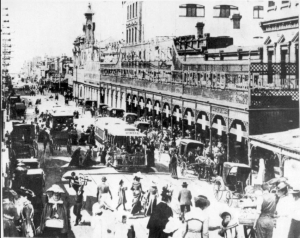 Next time you head off to Coles on Smith Street think back over 100 years to when it was home to the “the largest factory in the Southern hemisphere” and the first modern department store in Melbourne, Gibson & Foys.  The Smith Street that we know is a far cry from the one in 1911.  Whilst the department store attracted upmarket customers, a tunnel between the general store on the Collingwood side and the ladies store on the Fitzroy side was purported to be built “to protect the lady shoppers from ruffians hanging about on the street”. The tunnel was 3.6 meters wide and had a pressed metal ceiling and  tiled wall, with a modern brick wall being added at a later date. 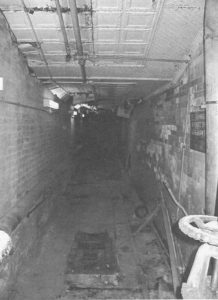 Stumbling upon the underground tunnels in the late1980s, three teenagers – Woody, Dougo and Sloth  – decided to make a regular practice of exploring Melbourne’s tunnels. Membership of the Cave Clan quickly grew to incorporate other youths but also writers, teachers, businessmen etc. Although considered an undesirable element by the authorities, they had their own safety rules, the main one being “When it rains, stay out of drains!” What started as adventure seeking for young kids has now turned into a global organisation!

There is something about tunnels that conjure up creepy stories. How about these? Believe it or not!!!

*There is a cave in the Silurian bedrock of the city where a dangerous Aboriginal supernatural being lives.

*Only professional magicians can access the AWG Alma Conjuring Collection in the State Library. There is a hidden vault with the most secret magician tools.

*There is a large underground crypt where bodies are still interred, entered by a trapdoor under the pews at the north-west end of St Paul’s Cathedral.

*And for the finale (and fortunately not in our neighbourhood) – Alien phantom big cats (pumas and cougars) live in the western suburbs, sleeping in hidden places like tunnels during the day and padding into backyards at night.