Did you know that the tradition of Carols by Candlelight began in 1938 in Melbourne?

It’s a sentimental story which began with 3KZ radio sports announcer Norman Banks walking home along St Kilda Road from his night shift on Christmas Eve 1937. He passed a window and saw an elderly woman sitting up in bed listening to “Away in a Manger” being played on the radio and singing along with her face lit by candlelight. Banks thoughts turned to others who may be spending Christmas alone and he had the idea to gather a group of people to all sing carols together by candlelight. 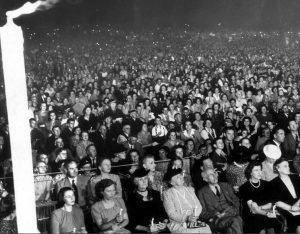 The following Christmas Eve, 10,000 people gathered at midnight in Alexandra Gardens to sing carols with a 30 strong choir, two soloists and the Metropolitan Fire Brigade Band. Banks himself hosted the first event which was broadcast live over radio station 3KZ. He continued to host until 1952 when he left 3KZ.

In 1939 the Lord Mayor, Cr Coles, delivered a Christmas message just before carol singers held hands and sang “Auld Lang Syne” as the post office clock struck midnight. 54 red-caped nurses from the Austin Hospital formed a circle around the rostrum. Late-night transport services were arranged to take the revellers home, including a special train to Geelong. By 1940 there were 100,000 carollers and a 500 person choir.

Wartime restrictions cancelled the outdoor Carols by Candlelight at the last minute in 1941 and brownout restrictions meant people had to cover their windows at night, forcing the event indoors to Collins Street Baptist Church. Obviously a man of many talents, two years later Banks wrote the lyrics to the “Melbourne Carol”, sung to Bach’s chorale, “Jesus, Joy of Man’s Desiring”.

As the popularity of the Carols increased, it soon outgrew Alexandra Gardens and the move was made to King’s Domain in 1942. In keeping with wartime restrictions it was a simple affair with a wooden platform, illuminated by torchlights held by scarlet -caped Red Cross nurses. An added attraction, however, was the appearance of Miss Gladys Moncrieff, “Australia’s Queen of Song” who was givena tremendous welcome. There were Christmas messages from the Lord Mayors of London, New York and Melbourne, and a message to the American troops in the south-west Pacific from the US Consul General. 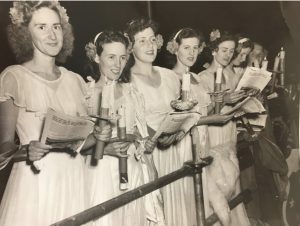 Christmas Eve 1945 was a huge celebration to mark the end of war and the festival began with a procession of the United Nations, a march of the Australian defence forces and a parade of Home Front groups. As 250,000 people had attended in 1944, it was expected many more would attend that year.

Originally all profits from the Carols went to the Austin Hospital. Then, during WWII, the Red Cross and the Australian Comforts Fund also received donations. Today, donations are given to Vision Australia (formerly the Royal Victorian Institute for the Blind).

The 1956 Carols was the first to be televised, as part of GTV9’s pre-launch test transmission. Australian rocker Johnny O’Keefe was asked to perform in 1959 and that started the tradition of inviting celebrities to host and perform. That was the year Carols by Candlelight made its permanent move to the newly constructed Sidney Myer Music Bowl and popular TV presenter Ray Martin would host the event there for 18 years.

Many famous Australian performers, such as Delta Goodrem, David Hobson and Vanessa Amoroso, headlined at the Carols, backed by three separate choirs, including the Boys and Girls Childrens’ Choirs, and later contestants from TV show “The Voice Australia”. In earlier years Carols by Candlelight had a strong classical and religious influence but, since the 1960s, the program has had a more popular theme.

Banks started his career at 3KZ as a football caller and later became a stalwart of radio station 3AW. His other distinction was pioneering talkback radio. Banks received an MBE from the Queen for outstanding services to broadcasting and later became chairman of the World Carols by Candlelight Foundation. 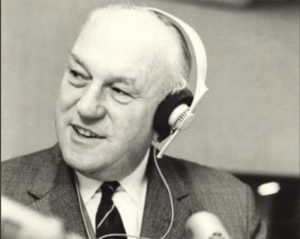 and died in 1985, but his Carols by Candlelight tradition lives on. The annual event arguably held a nation together during its darkest hours of World War II and is now held in many countries around the world.

My aim for Stories from Stop 15 is to tell stories of people, places and events all within a 15-20 minute walk from tram stop 15 on Victoria Pde. If you have come across something or someone you would like to know more about, please contact me. I love to research history and I like my readers to say: “I didn’t know that!”

Sources:
Image of Norman Banks from The Australian Media Hall of Fame