Just a short walk from Stop 15 down Smith Street to the corner of Peel Street and you come across the Grace Darling Hotel.  Built in 1854 and constructed of bluestone, it is one of the few remaining 1850s goldrush era hotels left in inner Melbourne. But just who was Grace Darling? 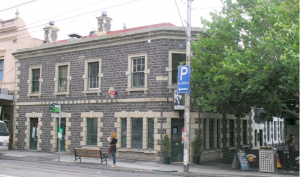 The Risby family owned the property from 1852 to about 1870, and on 12 December 1854 Thomas Risby was granted the first licence. Patrick Coyle, a brewer as well as a publican, took over the licence and lived at the Grace Darling with his family until 1880. During his time at the Grace Darling, Coyle’s children were born, one died in infancy, and his wife Catherine died two months later in February 1876.

The pub was the venue of the inaugural committee meeting of the Collingwood Football Club in 1892  when a decision was made to form a football club to play in the new Victorian Football League. The use of a hotel for such a purpose was not unusual, pubs serving important social and community functions in the absence of other venues.

The Grace Darling Hotel is on the Victorian Heritage Register.

WHO WAS GRACE DARLING?

Grace was born into a family of nine children in 1815 in Northumberland, England, with a devoted and hardworking mother and a father who was a lighthouse keeper. When Grace was ten the family moved to Longstone Lighthouse which had better accommodation but was far more remote, built just above the high tide mark on the most distant of the Farne Islands.

The family lived mostly on the ground floor which was the kitchen, living and dining area combined. The circular bedrooms were up a spiral staircase, one above the other, Grace’s being on the third floor under the warning lantern. 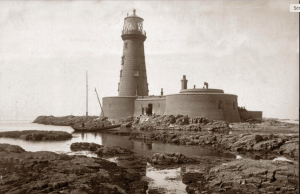 It was built on bare rock just over 1m above water at high tide and exposed to the full fury of the North Sea. The downstairs room was their kitchen and dining room as well as their living room. Above that, a spiral staircase led to three circular bedrooms, one above the other. Grace’s bedroom was on the third floor. The top level had the lantern, which warned ships of the dangerous rocks all around.

Sometimes, when her brothers were not around, Grace would help her father when he went out in the boat; she also took her turn at the top of the lighthouse keeping watch, day and night, for ships in trouble at sea.

One fateful night in September 1838 the steamship Forfarshire, laden with cargo and carrying 62 crew and passengers crashed into Big Harcar rock and broke in two. The back half was swept away and sank, with more than 48 people onboard. Grace saw the wreck from her window but it wasn’t until sunrise that she and her family realised with horror that there were survivors moving on the rock.

By chance, Grace was the only one of William Darling’s children at home that night so, when her father prepared the cobie for the rescue, Grace took blankets and went to join him. The tide and wind were so strong that they had to row for nearly a mile to avoid the jagged rocks and reach the survivors safely. There were nine people still alive on the rocks including one woman holding two children close to her chest, both of them dead. William leapt onto the rocks, which left Grace to handle the boat alone. To keep it in one place, she had to take both oars and row backwards and forwards, trying to keep it from being smashed on the reef. Grace’s father and three of the men rowed the boat back to the lighthouse, taking with them Grace, a badly injured man and the woman. Grace stayed and looked after the survivors with her mother while her father and two of the crew returned for the other four men.

Nine other passengers and crew had managed to float a lifeboat off the stern section of the Forfarshire before it too sank. They were picked up by a passing sloop and brought into South Shields that same night.

Those few men from the Forfarshire who had saved themselves by launching a boat on that fateful day were soon ashore, reporting the disaster. They assumed the others had all perished in the wreck and they knew nothing of the Darlings’ rescue. But within days word spread of survivors being saved. Local news reporters were quickly on the scene. One survivor wept as he disclosed that a young woman in a rowing boat had come to save them. 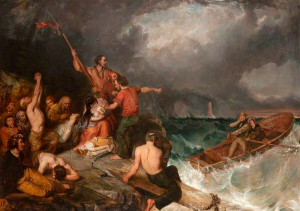 News of this act of outstanding courage spread like wildfire, throughout the country. Within days The Times had published an account. The papers described in detail the violence of the storm and the tragic fate of the Forfarshire and its passengers, but how against all the odds Grace, with her father, had been able to save nine souls from the wreck. It fired the imagination of the public who declared her a heroine.

William’s involvement received little comment; it was all about Grace – the beginning of a media frenzy.

As news of her role in the rescue reached the public, her combination of bravery and simple virtue set her out as exemplary, and led to an uneasy role as the nation’s heroine. Grace and her father were awarded the Silver Medal for bravery. Subscriptions and donations totalling over £700 were raised for her, including £50 from Queen Victoria; more than a dozen portrait painters sailed to her island home to capture her likeness, and hundreds of gifts, letters, and even marriage proposals were delivered to her. 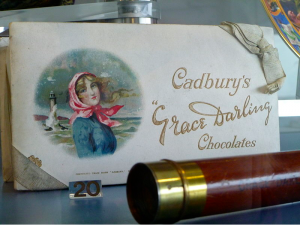 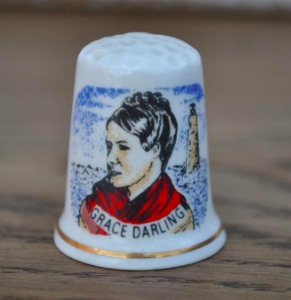 Grace Darling had poems, songs and plays and novels written about her. A series of Victorian paintings depict her rescue.

Her unexpected wealth and fame were such that the Duke of Northumberland took on a role as her self-appointed guardian and founder of a trust, established to look after the donations offered to her. His personal gifts to her and her family included a timepiece and a silver teapot.

Visitors arrived at Longstone in hired boats every day, many unannounced, to catch a glimpse of Grace hoping to meet her, touch her, or touch her clothes. Others were content to stand and stare.

Her story and her fame spread across Europe. The people of Japan learned of her deed and detailed accounts were also published in America and Australia. She had become a celebrity.

But Grace would not leave the lighthouse. Its familiar walls offered the only protection she had from a demanding and intrusive world. She wanted to return to her previous, uncomplicated life, but she was proclaimed a heroine and her new-found celebrity would not allow this.

The pressure began to take its toll on her.

In 1842, Grace fell ill while visiting the mainland. The Duchess of Northumberland heard of her situation, arranged for her to be moved to better accommodation close to Alnwick Castle, and tended to the ailing heroine in person as well as providing Grace with the services of the ducal family physician.

Grace’s condition declined, however, and in the final stages of her illness she was conveyed to the place of her birth, in Bamburgh.  Grace Darling died of tuberculosis in October 1842, aged 27.

At a time when hero stories were mostly about men, it is inspiring that the daring and bravery of a young woman has lived on to this very day. In her hometown of Bamburgh, the Grace Darling Museum keeps her story very much alive – as does The Grace Darling Hotel in Melbourne.