I have been deep in police history this month, researching and writing about my ancestor who served in the Irish Constabulary before emigrating to Victoria in the 1850s. He served in the Victoria Police Force after the Eureka Stockade and before the capture of Ned Kelly, just missing out on two newsworthy events of the times. My research uncovered a ragtag police force, drawn mainly from the lower classes, with no training and a liking for the drink. By the 1870s, 82% of the Victorian Police Force were Irish, much more than any other State.

So my interest was inevitably drawn to the forthcoming sale of the beautiful Police Association building on the corner of Clarendon and Albert Streets. I wondered about the history of the building, if it was heritage listed, who would buy it and for how much? And what would become of the site? I thought this would be an interesting research project for “Stories from Stop 15” but was surprised to learn the Police Association had only been occupants of the mansion for the last 21 years.

Originally, the site was occupied by shops before it was acquired in 1907 by tea merchant James Griffiths. Born in 1850 into a modest background in Wolverhampton, England,  Griffiths and his brother came to Australia in part to escape the stigma of alcoholism that ran through his family. Their business  became very successful and Griffiths Tea was soon drunk all over Australia. By the late 1800s Australia was supposedly the largest tea drinking country in the world. A newspaper report by one J.O. Moody in 1883 put the figure at 18 million pounds of tea a year, or 6.61 pounds for every man, woman and child. This put Australians well ahead of Britain, at a mere 4.5 pounds per head. 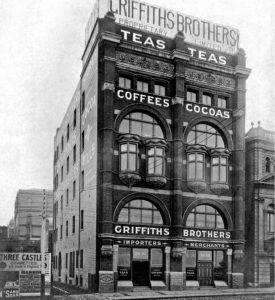 James Griffiths and his wife Emily were involved with Christian missionary work and the house was immediately given in trust to the Church of England Missionary Training Home for women missionaries. Missionary zeal was an important component of the Anglican faith at the turn of the 20th Century, and missionaries who were trained at St Hilda’s could find work in many parts of Asia, as well as at aboriginal missions in Australia.

When St Hilda’s first opened in 1908 the sister-in-charge was Miss Clara Odgers, and three women were accepted for training. 33 missionaries were already working both overseas and at the aboriginal missions at Lake Condah and Lake Tyers in Victoria.

The mansion is indeed listed on the Heritage Register of Victoria, and the Register’s Statement of Significance describes the house designed by architects Ward and Carleton:“St Hilda’s is architecturally significant as a fine example of the Arts and Crafts style of architecture. Its picturesque approach is a variation of the so-called Queen Anne style, which was dominated by red brick, terracotta and asymmetrical planning. Additionally, in the execution of detail, the design draws on the influence of Art-Nouveau. It is significant for its essentially intact interior, including both layout and fittings. The timber wainscotting, the robust pressed metal dado in the dining room and the coloured leadlight glass representation of plants and foliage contribute to an impressive and highly intact Arts & Crafts interior.

“St Hilda’s is historically significant both within the history of the Church of England and within the context of female employment at the turn of the twentieth century. As a training home for missionaries it was one of the few places to provide vocational training for women.

“A modern two storey rear addition with open-plan studio space is linked to the main house via a two level glass-walled walkway. This building does not form part of the registration.” 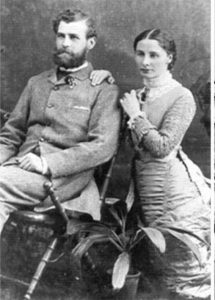 Tragically, James Griffiths and Emily, his wife of 50 years, were killed in a level crossing accident in 1925. The coroner’s inquest reveals they had an adopted daughter, who was also their niece, Elizabeth Moore Griffiths the presumed heir. In the 1930s the building became St Hilda’s Church of England Deaconess House, caring for unwed mothers and their children, and serving the poor and sick of the community. In the 1960s it was sold and converted into apartments.

Bates Smart, our very own Eastbourne architects, purchased the building for offices in 1982 and remained there until 2001. Bates Smart restored the house, retaining much of the original fabric and fittings, and researched and reproduced the original paint scheme.

The Victorian Police Association then purchased and occupied the site until the present day.

And who are the new owners? The building has been sold to Elizabeth Ring, ex-wife of Swisse Vitamins multi-millionaire Stephen Ring, for more than $22 million. Ring’s company has placed a buyer’s caveat on the property, title documents show.  The block, one of the last freehold corner sites over 2000 square metres fronting the park, is zoned Commercial 1. What will become of the building and the site? We will have to wait and see for that one.

If you have seen or heard about anything in our area you would like me to research and write about, please contact Luana Kenny, our Newsletter Editor.