March is Women’s History Month and so I’d like to tell you the story of Mary Gilbert whose statue sits at the Conservatory in Fitzroy Gardens. Mary was the first European woman to live in the Port Phillip settlement, and gave birth to the first white baby born there. But it’s not a happy ending for Mary.

In August 1835 a small party of eight men and one woman sailed from Launceston, Tasmania on the schooner Enterprize owned by John Pascoe Fawkner. A last minute restraining order issued on Fawkner, because of debt, caused him to return to town.

The Enterprize anchored in the southern part of Port Phillip Bay before being hauled upstream. She moored at the foot of present day William Street and a camp was made at a place where the Yarra River flowed over a low rock ledge. The settlers set about building a store and clearing land to grow vegetables. They were Captain John Lancey, George Evans and his servant Evan Evans, Charles Wyse, Thomas Morgan, and blacksmith James Gilbert and his pregnant wife Mary. 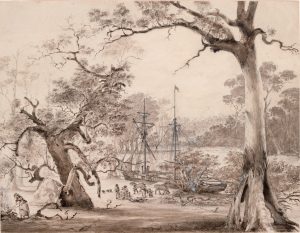 James Gilbert and Mary Duff had married in Launceston and had a son James who died in January 1835 aged 12 months. Because of Tasmania’s convict past, it was likely that James and Mary were convicts themselves or children of convicts but that’s another story. On 29 December 1835 Mary gave birth to her son John Melbourne Gilbert. Mary was given 500 acres of land and a town allotment and, supposedly, the settlement’s first cat to keep Mary company. Two more sons followed, Charles Phillip and William.

By the late 1860s the family had moved to Young in NSW then a few years later to Tumut. There are several stories of how Mary Gilbert died, but a magisterial enquiry held on 9 March 1878 reveals what caused “the death of a very old and infirm woman, named Mary Gilbert. The following facts were disclosed. On the Messrs Gibba’s run of North Talbingo, in two small bark gunyahs, dwelt William and John Gilbert, Mary Gilbert, their mother (the deceased), and a little boy, after five years old, the son of William Gilbert – the latter’s wife had previously died there after giving birth to a still-born child; there was no bedding in these wretched abodes save some leaves in the one where the men slept, and a few pieces of dirty blanket in the other. The occupants only possessed the clothes which they then wore. On Monday morning William Gilbert went to his work of slitting timber in the bush, leaving the old woman and the little child at the camp. John, the older brother, was at the time working for Mr Shelley, Mr Gibb’s overseer, some miles away. In the evening when William Gilbert returned to the place he found his mother lying in a small pool of water outside one of the gunyahs, with her garments burnt off to her waist. The unfortunate woman was alive but only muttered some unintelligible words. The little boy stated that his grandmother’s clothes caught alight while she was leaning over a stool by the fire, she called him to help her, he got a pint pot and poured some water on her, she then crawled to the gunyah and laid herself down, while he worked away with the pint bringing water and pouring it over her burning clothes as fast as he could. (By the quantity of water around the deceased the child must have pursued his task for a long time.) Gilbert covered his mother with a few rags and went off for a messenger to send to the station. Finding a lad, he sent him to Mr Shelley for some oil. The boy told the overseer that the woman was burnt a little, but would soon be all right. The oil was of no use when brought, as the unfortunate sufferer had died in the meantime. John Gilbert was sent for, but was very tardy in coming. Neither of the men could read nor write, nor tell his age; they thought their mother was about 63, but she might be 80. The deceased was fearfully burnt about the extremities, and exposed portions of the body were in a filthy state, evidencing sad misery and neglect. That able-bodied men should be content to live and keep their families under such circumstances in a country like this is almost past belief.”

Melbourne City Council commissioned the memorial to Mary Gilbert for the 1975 International Women’s year. O’Connor claimed of Mary Gilbert that she was a ‘sort of proletarian founding mother’.

It is pleasing to think of Mary Gilbert commemorated for eternity in such a beautiful garden surrounded by the colours and aromas of beautiful flowers. I won’t look at that statue in the same way in future. It will remind me of Mary and the trials and tribulations of her life.

A watercolour painting of the topsail schooner, Enterprize, at the founding of Melbourne in August 1835. The author and date of creation are unknown but a replica was published in Harper’s Weekly (New York) vol. 29, no. 1498; 5 September 1885 p. 580. The female image is mostly likely Mary Gilbert, the sole woman on the voyage.
Unknown author – Cropped from the original at State Library of Victoria http://handle.slv.vic.gov.au/10381/47936

My Dries ancestors from Lorchhausen, Germany

I love reading our history, I was born and lived at 527 Victoria street abbotsford