The history of Macdonell House begins in 1822 with Harper’s Plan of Sydney outlining occupancy of land in the block bounded by Pitt and George Streets, and Bathurst and Park Street. It occupies Lots 3 and 4 and portion of Lots 2 (one perch) and 16 in Section 18, Parish of St Lawrence, County of Cumberland. It is adjacent to the 1907 YMCA building.

Some idea of the area can be gauged from the following two descriptions of Pitt Street, written 9 years apart, presenting quite different scenes:

From Park Street to its southern termination, although less occupied by expensive buildings, is remarkable for the neatness and cheerful appearance displayed by most of the cottages with which it is lined on either side; the small garden plots before them, their shaded verandahs, and the regularity of design which many of them display.

Pitt Street then crossed Park St to the Criterian Theatre and Hotel. Past the bookshops next to the ‘Cri’ as it was known, past the Congregational Church. Opposite was another very old movie theatre, ‘The Shell’, then lots of furniture shops. It never paid to loiter here if walking. Otherwise a salesman, very high pressure, would come out and sign you up for a kitchen dresser, lounge suite or dropside table before you could say no. Some shops insisted that their assistants should ‘make their book’ whatever that meant. Often we poor shoppers, who so often were only ‘just looking’, were nearly torn in two by assistants, male and female, who were after a sale. 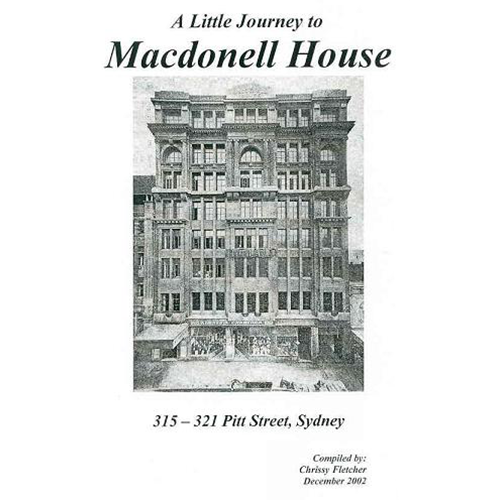 The numbering system in Pitt Street changed three times between 1845 and 1882.

Recorded history of Macdonell House dates from circa 1845 when the Sydney Council Rate Books show Ellen Sewell, widow of George Sewell, occupying a wood and shingle house and shop on the two lots. The Sewell family retained ownership of the land until 1880 when one block (by then numbered 317) was occupied by Fox Brothers, Plumbers and No 319 occupied by Ebenezer Scott, Tin and Iron Works. On 22 February 1881, Lot 3 was sold by conveyance from Thomas Sewell and others to John Macintosh who established an iron warehouse in the block. Dove’s Map of 1880 shows Macintosh had several Iron Warehouses in the block. 1882 Illustrated Guide to Sydney by Gibbs, Shallard & Co:

Macintosh’s Iron Warehouse is a new, solid, compact freestone office and store, three stories in height, of equal proportions but slight ornamentation; it is however, roomy, very secure from fire, and a great addition to the street. A few retail establishments of graceful character, and a corner Hotel, the “Edinburgh Castle” are all that it is here necessary to direct visitors attention to, as for a considerable space the street is composed of one and two storied houses some of which are showing the effects of age, and others have been fuilt more for immediate convenience than for permanent beauty.

Lot 4, an original 1834 crown grant to David Greville passed through several owners to Thomas Argent in 1840 who was the owner/occupier with a brick and shingle roof house of one storey and a wooden one-room stable. By 1854 there were two buildings on Lot 4, John McKay renting a 2 storey brick and shingle store and owner Thomas Argent living in a 2 storey 2 room brick house. Argent sold the lot to John Macintosh in August 1856 and in 1880 with the current number of 315 Pitt Street, it was being leased by long-term tenants W.P. Welch, window and blind makers and Atterton & Co, painters and decorators.

Lot 16 and its right-of-way from George Streetwas originally part of the estate of George Sewell which eventually was sold to John Moore, the bookseller in 1875. By June 1885, John Macintosh was the owner of part of Lot 16 and in 1912 Labor papers Limited purchased all three portions of land from Macintosh with a valuation of £27,990.

John Macintosh 1821-1911 arrived in Sydney in May 1839 with his sister and brother-in-law as a bounty immigrant. After working up country at whatever job he could get, he set up in Sydney as an ironmonger in 1846 and soon had twelve employees making nails, hinges and other hardware. From December 1861 to November 1877 macintosh represented Macquarie Ward in the Sydney City Council and in 1881 was appointed to the Legislative Council. Macintosh served on many committees, including the Sydney Mechanics’ School of Arts. He served on several committees, was a magistrate and company director and his business had grown to over 40 employees and each month was distributing and selling over 500 tons of hardware. Following his death on 6 July 1911 the Trustees of his estate sold the land to Labor papers Limited who intended to erect an 8 storey building on the site.

The following two photos show the buildings owned by Macintosh on Lots 3 and 4, taken circa 1912 and the buildings are ready to be demolished to make way for the construction of Macdonell House by Labor papers Ltd.

The construction of Macdonell House by Labor Papers Limited was completed in 1914 at a total cost of almost £79,000. It was called Macdonell House after the late Donald Macdonell, MLA, who was for several years the General Secretary of the Australian Workers’ Union.

Whilst researching at the Mitchell Library I came upon a serendipitous find called “A Little Journey to Macdonnel House” compiled in 1922 printed and distributed by the Trade Unions. It is trade union propaganda “to the trade unionists of Australia”, heralding the soon to be published “Labor Daily” newspaper. With the manuscript is attached a Manifesto, outlining the facts of the “Labor Daily” which was originally to be published in November 1914. With the outbreak of war in August of that year, plans were shelved, mainly due to the exhorbitant rise in newsprint paper.

Labor Papers Limited took over the ailing Tasmanian “Daily Post”, changing its name to “The World” . In 1921 the All-Australian Trade Union Congress requested a chain of Labor Dailies in Australia and pledged Unionists to raise the capital by a Levy of ten shillings per man and five shillings per woman.

The “Labor Daily” was first released on 23 January 1924. It existed an unofficial mouthpiece of State Labor leader, JT Lang, and was a popular and widely-read newspaper. The final edition of the “Labor Daily” was on 1 December 1938 after when it became the “Daily News”, still very much a people’s paper.

On 4 December 1944 a building application was lodged by the ground floor occupant, the British Service Centre. (The owner was the Australian Workers Union). The British Service Centre wanted to add partitions and counters on the ground and mezzanine floors and face the front piers with masonite, at a price not to exceed £3500. Consent was given to commence building operations under the National Security (Buildings Operations) Regulations dated 29 November 1944 and the permit was granted by the Department of War’s Organisation of Industry.

Labor Papers leased the ground floor and various other floors to a variety of tenants from 1914 to 1961, the ground floor being often furniture sales while newspapers Truth and Sportsman Ltd still occupied upper floors.

In 1960 Labor Papers intended to erect a nine storey building on the George Street site as an extension of its adjoining Macdonell House on behalf of the Sydney County Council. Approval was given for the erection and the new building was completed on 20 June 1962.

SCC Valuation List/Rate Books show the Australian Workers Union continued to be the owner until 1981. It traded five times between 1981 and 1997 and in April 1998 Macdonell House was subdivided in eight strata title floors and the building refurbished in 2000.

One of Australia’s largest independent photographic retailers, Fletchers Fotographics, has been in residence on the ground floor since 1979. Other tenants in 2002 are:

It is interesting that Macdonell House has had such a continuous trade union connection, from its inception to the present day. If a building has a heart, then the heart of Macdonell House certainly lies with the trade union movement, borne out by the fact that five major tenants of the building in 2002, totally by chance, are unions.