Between 1848 and 1850 over 4000 adolescent female orphans emigrated from Irish workhouses to the Australian colonies, arriving at Sydney, Melbourne and Adelaide. Their emigration has become known as the ‘Earl Grey scheme’ after its principal architect, Earl Grey, Secretary of State for the Colonies in Lord John Russell’s Whig government at the time of the Great Irish Famine.

It has not always been recognised that Irish women made a tremendous contribution to Australian society. About one third of convict women were Irish. More than 1000 young single women came to Sydney and Hobart in the 1830s, a handful from Foundling Hospitals in Dublin and Cork but many from ‘respectable’ but often poor circumstances. Approximately 18,000-19,000 Irish migrants arrived under some form of government assistance to Melbourne and Sydney between 1839 and 1842. Of these about half were female. Gender balance was a defining characteristic of Irish migration to Australia throughout the nineteenth century. In 1855-56 over 4000 single Irish women arrived in Adelaide. Such infusions of Irish female blood had a telling influence on the development of colonial society. These ‘Earl Grey’ female orphans sit comfortably within that tradition.

The difference is that this group of young women stand as symbolic refugees from Famine. They came from among the genuinely destitute class in Irish society, those whose world had been torn apart by the tragedy of the Great Irish Famine (An Gorta Mor). They were inmates of the recently constructed workhouses, many orphaned by the Famine, although about a quarter of them had one parent still alive. Most were between 14 and 20 years of age, ready and willing to grasp the opportunity of a new life in the Antipodes.

Early in 1848 the British Imperial Government in London, drawing on years of past experience, began its meticulously organised emigration of young females from Irish workhouses. Irish Poor Law Commissioners circularised the Boards of Guardians of Irish Poor Law Unions asking if there were any young women ‘between the ages of fourteen and eighteen’ in their workhouses willing and eligible for a passage to Australia. Would they also be willing to pay for outfits of clothing for the girls and the cost and responsibility of taking them them to Plymouth in England from whence the sailed to the Australian colonies?

If so, workhouse officers were to seek character references, medical examinations were to be arranged and the chosen young women were inspected on behalf of the Colonial Land and Emigration Commissioners (CLEC) in London by Lieutenant Henry, a semi-retired Royal Navy officer. In return the CLEC chartered ships to carry the Irish famine orphans to Australia, arranged their berth, the food they ate and their supervision by a government appointed Surgeon Superintendent. The first vessels, the Earl Grey and the Roman Emperor with young women chosen from workhouses in Ulster left Portsmouth in June and July 1848. A few months before the arrival of these vessels, some female orphans were sent unheralded from Dublin and Cork Foundling Hospitals and Orphan Asylums by the British and Irish authorities. The vessels they came on were the William Stewart and Mahomed Shah to Port Phillip with calamitous results, and the Subraon to Port Jackson. These orphans were not part of the official scheme and are not captured here in the database on this website.

In a sense the young women who came to Australia by the ‘Earl Grey scheme’ were a small part of renewed Government assisted emigration to the Australian colonies. In the eyes of Imperial social engineers the Famine orphans were young marriageable women who would bring a stabilising influence to rough masculine colonial societies. Unfortunately, Earl Grey simultaneously attempted to renew convict transportation to New South Wales and make the colonies pay for the migration of the young women, something not explained to the colonists before the scheme began.

Some of the Irish orphan ‘girls’ were maligned in the Australian metropolitan press as immoral dregs of the workhouse, ignorant of the skills required of domestic servants. There were some notable exceptions: the welcome given the Thomas Arbuthnot women in 1850 as they made their way southward from Sydney is the best known. The Surgeon on board the Thomas Arbuthnot, Charles Strutt, accompanied 105 of the young women on their southern journey to the Yass and Gundagai areas of New South Wales and helped findi them suitable employers. Generally, however, opposition to the female orphan scheme was so strong that it ended within two years. The last vessel to arrive was the Tippoo Saib on 29 July 1850.

Our story does not end there. Australian historical records are so rich they permit historians to reconstruct the lives of many of these young women. While their experiences of the Famine and their days in the workhouse were best forgotten, in the long run they fitted into colonial society. Many of them lived in the kind of world so poignantly described in Australian literature in Henry Lawson’s story of ‘The Drover’s Wife’, in Barbara Baynton’s ‘Bush Stories’ and, at a slightly later date, in Ruth Park’s stories of women in the inner city. They became ‘mothers to the Australian character’.

Our hope is that these young Irish Famine orphans may be seen as representative of all such refugee women who come to Australia. As Tom Power, Chairman of the Great Irish Famine Commemoration Committee (GIFCC) so eloquently remarked at the unveiling of this Memorial in 1999, they are ‘a continual reminder of the many terrible realities, similar to the great famine of Ireland, occurring in the world today and which cry out for our compassion and concern’.

The database of orphans and ships on this the Famine Memorial Website www.irishfaminememorial.org/orphans/database/ holds basic information on all the girls and is the best starting point to research your Irish Orphan Girl or, indeed, confirm if you have one. If you find you have an ancestor who came to another State, you can contact Dr Perry McIntyre via the website on contact@irishfaminememorial.org

Trevor McClaughlin wrote the definitive history containing the first database of names of the Famine Orphan Girls in his book Barefoot and Pregnant: Irish Famine Orphans in Australia. Volumes 1 and 2 sold out quickly and the book is no longer available to purchase but you should be able to get a copy from your local library.

Trevor continues to work on the orphan girls through his excellent blog https://earlgreysfamineorphans.wordpress.com/ and I urge you to sign up for regular updates.

Trevor McClaughlin’s map (below) showing the location of the orphans in Victoria c1861 shows how the orphans and their families were attracted to the goldfields.

Colonial authorities moved some orphans away from Melbourne to Geelong and to the Western Districts via steamer, to Portland. My great-great grandmother Eliza Sharkey found herself in Geelong in 1852. 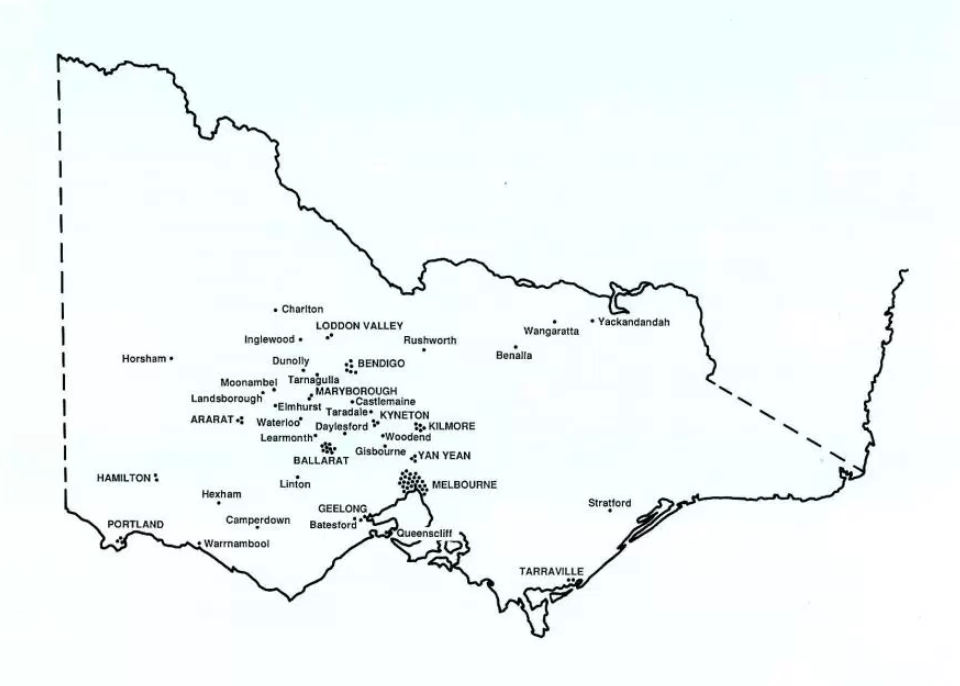