Armorial shields are arms that had ancient and tribal significance, as opposed to arms that were later assumed by an individual as a part of a non-hereditary British knighthood.

The arms of the Barrett family are based on word play, a pictorial version of barrettes, French for ‘short bars’.

Barrett:  Barry of ten per pale argent and gules counterchanged.

The crest of the Barrett coat of arms is the lion in an upright position. This signifies a rampart charge.

The shield, the main element, is silver for serenity and nobility, red for fortitude and creative power, and blue to represent loyalty and splendor.

The motto ” Honor virtus Probitas” is Latin and means Honour, Virtue, and Integrity. However, it appears that the motto for the Irish coat of arms may be different –  “Frangas non Flectes” meaning Unbowed, Unbroken.

I have found various interpretations of the Barrett Coat of Arms: 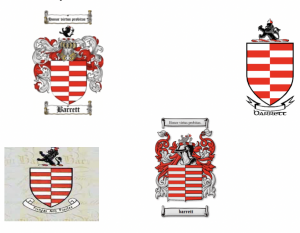 An Account of Sarah Mallett – a Call to Preach

My Dries ancestors from Lorchhausen, Germany